skip to main | skip to sidebar

Okay, I bet you didn't even notice the space-time continuum warp just there, did you? Thanks, Ceallach!

Well, on with Friday then. What have I been doing? Spinning like a dervish, that's what. The local spinning Guild meets the third Saturday of every month, yup? Yup.....apart from November and December, when it all goes a bit funny. So as I discovered on Monday, the Guild meeting is tomorrow, and I hadn't finished spinning my Colour Challenge fibre, oops.... 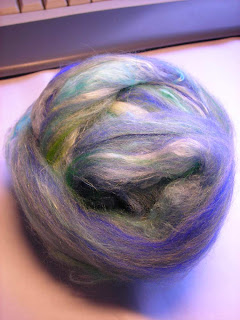 Which is from a drum carded batt I made from these fibres. 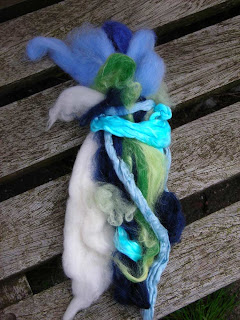 Firts comment here is just observe how the availible light changes the colours in a photograph, as if we didn't know. The first was taken on my desk a few weeks back, in front of a very big window on a sunny day, with a fluorescent lamp on to balance the shadows, the fluorescent light option on my camera switched on and a white balance taken. Just compare to the second picture, which was taken eight weeks ago on the garden bench, natural daylight, overcast day and auto-everything on the camera. Just shows how much the reds shift in the first pix, no? That roving is sitting on a supposedly white sheet of paper.

It carded up into a very nice batt, very soft due to the merino and other fine dyed wools and with a lot of texture due to the silk roving and also some coarser pale green Shetland (?) which is providing some lovely little nubbs. I am on my last ten grams or so of the second bobbin of singles and I'd better get my butt in gear over spinning the rest and plying it because as I said I need to show this skein at Guild tomorrow. And I'll need to get it washed and dried as well, oops. Think I'll manage?

I'm also part way through spinning the Spunky Eclectic Fiber Club October fibre which is an interesting Romney wool dyed in a colourway called Goblin Eyes. I'm trying to spin this as a possibly aran weight thick and thin slubbed two-ply, but I'm struggling. Like most spinners I started off doing this type of spinning really well, then I got gradually thinner and thinner till now I have real problems making anything other than fine fingering yarns. However as I'm spinning the September fibre (Merino Tencel, colourway "Aspen") as a sockweight yarn, I thought I would try something different with the Goblin Eyes. To be frank I'm not enjoying this fibre...it feels like spinning hair, though the singles are soft enough.

I've not finished the September Club fibre either, but no rush there. 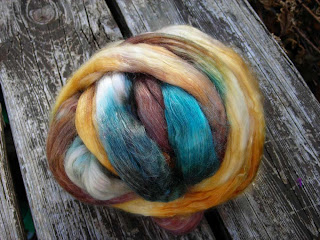 I do like the Spunky Fiber Club. If you look back through the blog, there's some really fabulous fibres and colourways and it's very exciting to get the parcels in the post. (I keep looking at her Sock Club too, but...well, budget constraints!)
Posted by Spinningfishwife at Friday, November 09, 2007